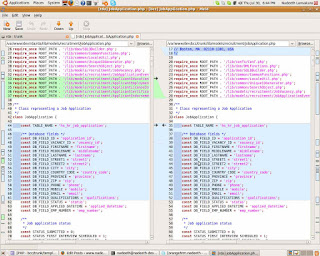 Few weeks a go, I was doing some source code merging works. Some features developed in some branches of the repository were merged into some other branches. For the simple merging tasks, we directly use the "svn merge" command. But, in most of the times, we can't achieve what we need just using the "svn merge". That is, because the branches we do the merging between, have been grown largely, and independently.

For these situations, we have to use a good merging tool such as "Meld". Actually, this is the best tool I have ever seen for this task.

When you merge some thing did by other person in some other branch, there may be some difficulties, because you may don't know the exact files and places to add the modifications. In this type of situations, it is easy to start the merging from known place such as an UI. After merging that known place, you can run the application, and through the error messages you get, you can find all the other places that are to be merged. Usually, you can do this by starting in a place such as an UI and it will end up in a place such as a data base table eventually. Although this method is very simple, I found it is very effective, and you can finish the whole process in a less time. This is a test driven way, so I would like to call it as “Test Driven Merging”.

Popular posts from this blog

How to avoid those little issues one can get when creating new projects with Zend Framwork...

March 01, 2012
CSS styles my not apply to the templates : Some times this happens when you haven't created a virtual host for the application. After the virtual host is created styles will apply properly, or just use some url helper like "baseUrl" when linking the style sheets to the templates. Error messages when using the commands like "zf enable layout", "zf create db-table ....", "zf create model ...", "zf configure db-adapter", and "zf create action ...." etc... You may get error like "Action 'enable' is not a valid action", "Action 'configure' is not a valid action"......... etc... Reason for this may be, the Zend library is not in the include path. If so add the library path to the include path. Or check whether there are old libraries in any directories of include paths that conflicts with the new one. Check whether there is a one as a PEAR package. And check whether the "zf" c
Post a Comment
Read more

How to create a waveform animation with HTML and JavaScript

June 14, 2017
Recently, for a pet project, I wanted to create an animation of a waveform based on the varying decibel level of the microphone input. I was thinking about a really simple way to accomplish this with SVG and JavaScript. Given below is the first sample code I did on the Codepen. You can change this code to use with any framework of your choice. For this sample code, I am using a random number as the microphone input. You can replace it with any other time based input. Code Pen : https://codepen.io/nadeeth/pen/vmaYXw For this example, you need an HTML code snippet like the one given below. It’s just an SVG with a Polyline element inside.  <div style="text-align:center">   <svg height="150" width="400" id='svg'>     <polyline id="polyline-id" fill="none" stroke="#005c66" stroke-width="1" />   </svg> </div> And then the plain Javascript code to animate the polyline. You can
Post a Comment
Read more